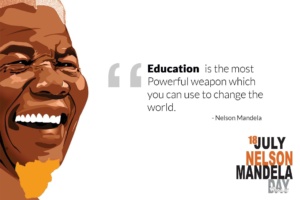 18 July, which is Nelson Mandela’s birthday, was declared by the United Nations General Assembly (UNGA)(link is external) as Nelson Mandela International Day in 2010.  The celebration of this international day recognises and gives credence to the former President’s commitment to human rights, conflict resolution and reconciliation.

It is an annual celebration of Nelson Mandela’s life and a global call to action for people to recognise their individual power to make an imprint and change the world around them.  A global movement for positive change begins with small actions. As each person acts, they fuel momentum toward positive change, raising awareness and expanding the reach of Mr Mandela’s values – fighting injustice, helping people in need and practicing reconciliation.

Mandela Day was created to inspire people to embrace the values of democracy and contribute towards the ideals of ensuring a just and fair society.

This day recognises the icon’s leading role in and support for Africa’s struggle for liberation and unity, and his outstanding contribution to the creation of a non-racial, non-sexist democratic South Africa.

Mr Mandela became South Africa’s first democratically elected president in 1994. As a champion of reconciliation, he was instrumental in the Truth and Reconciliation Commission, which was set up by South Africa’s Government of National Unity to help deal with the atrocities of apartheid.

Before his presidency, Mandela was heavily involved in anti-apartheid activities. He served 27 years in prison, many of which were spent with other sentenced freedom fighters.

While officially retired, he continued to voice his opinion on topical humanitarian issues and campaigns globally for peace, children and the fight against HIV and AIDS.

Government calls on all South Africans to contribute to the social and economic security of Africans, by living the values of our Constitution that provides for the rights of all people living in our country and the affirms democratic values of human dignity, equality and freedom for all.