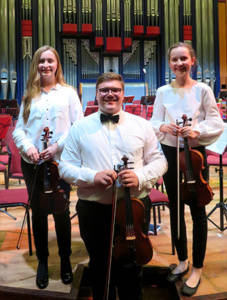 Learners wanting to play in this orchestra have to play an audition during the second week of the school term, and they also have to attend a workshop during one week of the April holiday. After this intensive training, the orchestra presents three concerts, of which the gala evening is usually held in the ZK Matthews auditorium of UNISA.

Every year learners who are already an orchestra member may also audition to perform a concerto with the orchestra. During 2008 and 2009 the Music Department of Pro Arte Alphen Park had three soloists out of the five that were chosen – Carin Jansen van Vuuren (violin), Visser Liebenberg (clarinet) and Maritz Liebenberg (flute) were performing Mozart, Weber and Chaminade.

The orchestra manager is mrs Lynette le Roux, and she may be contacted by the end of November on 012 460 8623 to arrange an audition.

The Tshwane Youth Arts Festival was founded by Pro Arte Alphen Park and Laerskool Anton van Wouw in 1995. It is presented each year on the Opera Stage of the State Theatre and runs over a period of 3 weeks giving more than 120 schools in the greater Gauteng area the opportunity of participating. The aim of the festival is to stimulate and promote the performing and visual arts of all cultures within the schools of Gauteng.

The Tshwane Youth Arts Festival is well established and recognized amongst schools. It has over the years been on TV and radio and in local newspapers.

At present Mr Johann Güldenpfennig (chairman) and Dr Riana Bester serve on the Board of Directors.